These funny riddles and answers are guaranteed to make you think, and they will hopefully make you laugh as well. A good funny riddle is one that provides your brain with a logical puzzle as well as using jokes and humor to tickle your funny bone. 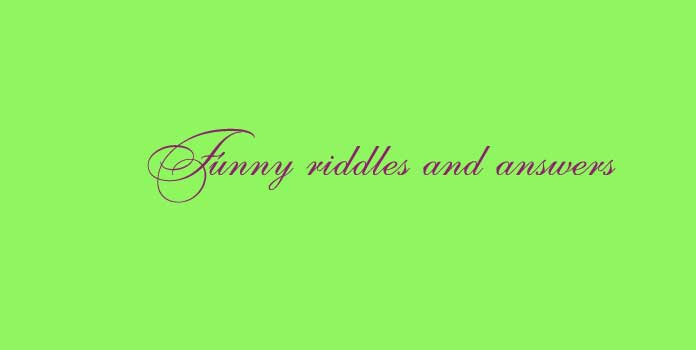 How would it be possible for an unhappily married couple who can’t stand being around each other and are contemplating divorce enjoy a romantic meal and a bottle of wine at the same restaurant?

What did the piece of wood say when he saw the screwdriver and screws approaching?

Why was the leader of al-qaeda moody, frustrated, angry and easily annoyed?

What would be the favorite vegetable of hippies, Snoop Dogg, teenagers and stoners? Pot-tatoes

Where did Bill Clinton and all the married men who are cheating to their wives take their mistresses shopping?

Why would female hippies be attracted to and want to marry Willie Nelson?

Show Answer
So they would have a joint bank account

As Santa got older, he started to struggle to walk well. He tried using a walker and a wheelchair, but these didn’t work well for him. The doctor finally found the perfect thing for him. What was it?

What two things can you never eat for breakfast?

What has a face and two hands but no arms or legs?

What tastes better than it smells?

What kind of room has no doors or windows?

During what month do people sleep the least?

What goes up and never comes down?

What word becomes shorter when you add two letters to it?

Two children are born on the same day from the same mother but they are not twins. How is that possible?

Show Answer
They are triplets!

Before Mt. Everest was discovered, what was the highest mountain in the world?

How much dirt is there in a hole that measures two feet by three feet by four feet?

Show Answer
There is no dirt in the hole.

What has four wheels and flies?

What gets wetter the more it dries?

Which word in the dictionary is spelled incorrectly?

You can’t keep this until you have given it.

What grows when it eats, but dies when it drinks?

What spends all the time on the floor but never gets dirty?

What animal turns about 200 times around its axis after it dies?

How many months in the year have 28 days?

Show Answer
All of them.

A man goes out in heavy rain with nothing to protect him from it. His hair doesn’t get wet. How does he do that?

Show Answer
He is bald.

What part of the Turkey has the most feathers?

Show Answer
The Outside.

What goes up and down but never moves?

Ten ladies tried to fit under a small umbrella, none of them got wet. How did they do it?

How can you add eight 2s together so that they make up a total of 250?

Show Answer
No, it is not

I only come out at night, but not every night and I am not sleeping in the day. In fact I am always there, you just often don’t see me. Some people think I look like a bunny, whereas others claim I look like a person.

I am short, I come second among a dozen, and every four years I change in a way that none of the other dozen do. What am I?

Show Answer
The month of February

I am long and cylindrical, I live in a house that can make you fall down, but I can also easily be crushed in the palm of your hand. What am I?

You see me 3 times in December, once in June, twice in November but never in July. What am I?

Show Answer
Two. Each circle within a number is equivalent to one. For instance, the numbers 6 and 9 are equal to one because they have one circle and the number 8 is equal to 2 because of its two loops.

I have two different cases but I never win nor never lose and never need a lawyer.

What goes up but never goes down?

So Joe was once again caught lying to his teacher, and his teacher Mr. Rogers had enough. “Come here Joe” he said. “Here is your punishment, I want you to make a statement, if it’s true you get detention, if it’s false you get suspended.” What did the Joe say that caused him not to get punished at all?

Show Answer
I will be suspended.

Show Answer
One. If he combines all of his haystacks, they all become one big one.

Show Answer
Neither, the yolk of the egg is yellow. Duh.

In California, you cannot take a picture of a man with a wooden leg. Why not?

How much dirt is there in a hole that measures two feet by three feet by four feet?

Show Answer
There is no dirt in a hole.

Have a great time with funny riddles and answers and don’t forget to share the laughter and mental stimulation with others!

This site uses Akismet to reduce spam. Learn how your comment data is processed.